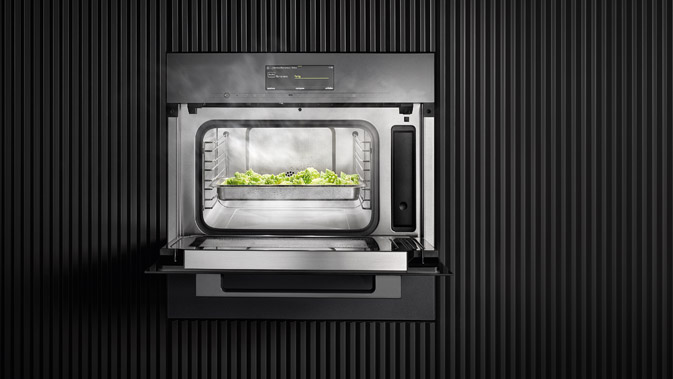 No appliance manufacturer has promoted the interests of steam cooking more than Miele. As early as 1998, the company presented a steam oven with a water tank in the form of the DG 163 - a model easily accommodated in an existing kitchen, heralding the establishment of a new product category over the following years. With its Generation 7000, Miele is now presenting its fifth model series and what amounts to the broadest and most innovative array of machines on the market: Steam ovens, steam ovens with integrated microwave, combi steam ovens (combination of steam oven and conventional oven) as well as a pressure cooker. The new models stand for culinary excellence but are also ideal for fast and wholesome everyday cooking.

Making a convincing product even better was the challenge Miele faced in further developing its steam ovens for 60 cm and 45 cm recesses, available in three model versions. Two features confirm that product engineers have succeeded in their endeavours: The oven interior has grown by 6% to 40 l and now sports a linen-weave surface structure which has upmarket appeal and is impervious to scratches. The proven and powerful steam generator with its 3.3 kW rating pipes steam into the oven through two ports (DualSteam). The new arrangement of these nozzles further reduces the fast heat-up times, and ensures the uniform distribution of steam throughout the cabinet, an aspect which is particularly beneficial at low temperatures (e.g. in sous-vide cooking).

The steam oven with microwave comes into its own where there is only one other cabinet recess available for a cooking product alongside a conventional oven. The Miele DGM is both a fully-fledged steam oven and a full-blown microwave, able to solve many a space problem in the kitchen. Whereas the previous model demanded a choice between steam cooking and microwave cooking, the DGM 7000 combines both in the new 'Quick Cooking' setting. Small potatoes, for instance, require only half the time in this mode – without the least trade-off in terms of quality. The DGM features a 40 l oven interior and, on flagship models, M Touch controls.

Given their wide repertoire, combination steam ovens from Miele are considered cream of the crop among cooking appliances. These Miele appliances serve as fully fledged conventional ovens and full-blown steam ovens. One exceptional application is Combi Cooking. This method of food preparation relies on the additional, targeted use of steam to produce excellent results: For particularly tender meat dishes or crusty baked goods, the user has access to many different automatic programmes. Or the user takes full control and defines the individual stages of cooking by entering the operating mode, and the precise temperature, time and humidity in the cabinet.

The DGC not only excels in terms of culinary excellence: the new 'Mix & Match' function proves to be an invaluable assistant in everyday use. Mix & Match issues recommendations as to which foodstuffs can be placed in a combi steam oven together to produce a tasty or even crusty plated meal – without having to pay attention to different cooking times and temperatures.

Even the DGC for a 45 cm recess has a relatively large interior, particularly with a view to the usual applications in the kitchen, where it is typically used to complement a conventional wall oven. The DGC XXL, though, takes combi cooking to the next level. These models cater for the classic 60 x 60 cm oven recess and, at 68 l, sport a larger oven interior.

All combi steam ovens now profit from a feature upgrade. All now feature BrilliantLight LED interior lighting as well as new hinges which facilitate particularly smooth opening and closing of the appliance door (SoftOpen & SoftClose). MotionReact and DirectWater Plus (a plumbed-in water supply) are specifications reserved for higher-end models. MotionReact responds to the user approaching the appliance, pre-emptively switching the machine and the oven lighting on. Another scenario: A ringtone sounds at the end of a cooking process. As the user approaches the unit, the signal stops and the oven lighting is automatically switched on.

Short cooking times offered by only commercial products are the preserve of Miele's DGD 7000 pressure cooker. The current model is derived from the first domestic built-in steam cooker first launched in 1983. Since improved several times over, this pressure cooker remains unique: It operates in a temperature range of between 101°C and 120°C, which cuts cooking times by around 50% but is equally able to cook delicate foodstuffs without pressure. The DGD is a built-in appliance for a 38 cm recess with plumbed-in water supply and drainage. With a vertical lift door, the pressure cooker effortlessly matches other Generation 7000 appliances in stainless steel or obsidian black.