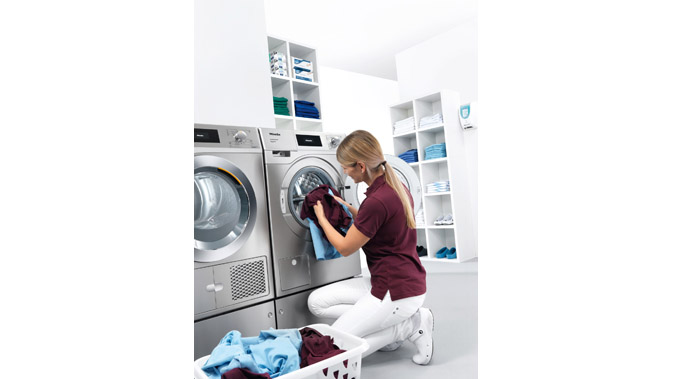 In installations where large quantities of laundry need to be washed clean in confined spaces, Miele's Little Giants have been living up to expectations for over 40 years. Now, existing washing machines and tumble dryers are to be replaced by two radically new model series: As before, the machines still require no more than half a square metre of space, but now boast an increased load capacity. At the same time, water and electricity consumption is set to drop. With a new touch display, the user interface is considerably simpler and hence safer. This also includes hygiene programmes which protect residents and staff against any cross-contamination.

Even at first glance, the high-quality stainless-steel fascia betrays the fact that these are not domestic machines. The technology behind the scenes, above all, is designed to cope with significantly higher levels of strain and use, as is the case in age-care centres. What's more, the machines are now available in three sizes: Washing machines and tumble dryers from the 'Performance' series offer a load capacity of up to 7 kg. Clients opting for the 'Performance Plus' series can decide between load capacities of 6, 7 or 8 kg. Naturally, all models feature the enhanced Miele honeycomb drum.

This represents an increase in load capacity of up to 25% - without any negative impact on cycle times. Consequently, the shortest cycle takes only 49 minutes. Despite a larger load, water consumption has been reduced by up to 22%; electricity savings peak at 28%. Work has continued on reducing drying times: The fastest programme on vented models is now down to only 37 minutes. The heat-pump dryer requires less than 60 minutes, or just two-thirds of the previous cycle duration.

On the washer front, the above improvements are the result of interaction between a variety of components. Textiles are, for instance, more intensively wetted than previously thanks to additional perforations in the drum rear panel. This effect is further intensified by a special wash rhythm in which a slow rotational speed allows copious amounts of water to shower down onto the load. Once the drum revs up, water and soil is powerfully rinsed out. This results in maximum cleanliness combined with the best possible care of fabrics.

Subsequent drying is curtailed through the particularly effective dewatering of textiles during spinning, now even reaching a g-factor of 704. That is one-third higher than on the previous generation – and sets a new benchmark in the marketplace. A 3D sensor ensures smooth running properties despite an increased spin speed. This device brings the drum to a fast stop when a load imbalance is detected, before changing the direction of rotation. This redistributes laundry before speed is ramped up again. Despite a clear increase in spin speed, the machine runs just as smoothly, an aspect which, in combination with high-quality components such as heater elements made from corrosion-proof material, makes for product longevity: The new Little Giants successfully passed endurance tests equating to 30,000 hours of operation.

Workaday life is further simplified by a door which is opened at the flick of a wrist, without having to press a separate button to release the door lock. The dryer excels in terms of the simplicity with which filters are cleaned. Another practical feature: A sensor-controlled level-fill indicator for detergent. Programmes are selected simply and fast via a new text display, available in up to 32 languages and including a delay-start feature. Machines from the 'Performance Plus' series are equipped with WiFi and offer connectivity with the MielePro@mobile app. In large care and nursing homes, for example, they indicate at all times which washing machines and tumble dryers are in operation and provide information on the availability of detergent – even from a distance.

Apart from tried-and-tested programmes for Cottons and Minimum Iron textiles, the new Little Giants from the 'Performance Plus' series offers 15 wash programmes which ensure reliable disinfection, including programmes which meet the requirements of the Association for Applied Hygiene (VAH) and the Robert Koch Institute (RKI). For instance, programmes without a pre-wash and with three rinse cycles at temperatures of up to 85°C meet RKI demands on infection control and hospital hygiene. Where necessary, the wash time can be extended at the outset of the main wash by pre-soaking, making even blood easy to remove. Later, time-controlled drying guarantees that damp laundry does not result in recontamination.