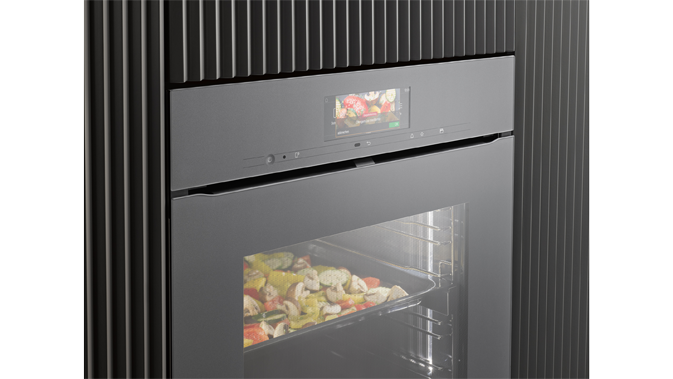 Miele is igniting the next booster stage in the development of assisted cooking as it continues to add artificial intelligence (AI) to its applications – for intuitive cooking and more fun in the kitchen.* Smart Food ID, the automatic recognition and preparation of food using a camera in the oven, is due to come under starter's orders in 15 European countries. A highlight for all those who like to share their cooking skills on social media: the new Picture Share feature, allowing an image taken by the oven camera to be forwarded to friends in the blinking of an eye. And with CookAssist, providing app-based instructions for the best possible frying and roasting results on Miele induction hobs, Amazon's Alexa will in future announce the next stages of preparation.

Smart Food ID was first launched in 2021 in Denmark and Great Britain to test the waters. From October onwards, the application will be initially free of charge in seven European countries. Germany and further countries will follow in 2023. Smart Food ID takes high-resolution images of food in the oven. By interpreting the images (computer vision), AI detects the food in question and suggests a suitable programme; all that is required to start cooking is to confirm the programme recommendation. Smart Food ID is a self-learning programme and benefits from photographs of customers' recipes, consent permitting, so as to become better and more reliable. Currently, the system recognises around 25 different foodstuffs and is even able to differentiate between fresh and deep-frozen pizza. In several programmes, Smart Food ID is controlled by the degree of browning and terminates the cooking of, say, a pizza when it is deliciously crusty.

Culinary greetings from the Miele oven

The thrill of anticipation is the real pleasure of cooking – and this can now even be shared by cooking enthusiasts with a virtual community or guests invited round for an evening meal via Picture Share. Here, too, the camera in the oven plays a central role by transmitting high-resolution images of roasts, gratins or cakes by the minute to a smartphone and is able to send photographs 'with a greeting from the oven' with a click in the Miele app to all the usual platforms such as email, WhatsApp, Instagram or Teams. And, for the more creative among us, the JPEG image can be processed and linked to an invitation. Picture Share is already available in the current release of the Miele App.

Culinary skill for the home kitchen is offered by CookAssist, the application for Miele induction hobs with TempControl. With step-by-step instructions provided by the app, demanding classic dishes such as steaks, salmon fillet or blueberry pancakes can be cooked to a T without any previous experience. Even greater intuition and cooking pleasure is promised by expanding CookAssist to include voice control via Amazon's Alexa. The transition from the app to Alexa is virtually seamless: In the app, only the recipe needs selecting which appears on the display of the Echo Show at the command 'Alexa, launch CookAssist'. The language assistant then guides through the stages of preparation. Using steaks as an example, the language assistant tells the user when the oil in the pan has reached the correct temperature so that meat can be added, right through to notification of when the steaks are cooked to perfection – all incredibly simple and without leaving greasy stains on the display when scrolling through to the processing step.

CookAssist requires TempControl rings fitted with sensors. Data from these devices is evaluated by an algorithm, enabling the reliable temperature control which is the secret to consistently good frying results. Burnt food fast becomes a thing of the past. The extension of the CookAssist application to include language assistance will be available with one of the next releases of the Miele App in 2023. At the same time, Miele is extending the range of recipes on CookAssist and will be supported in this respect by its subsidiary KptnCook, one of the most popular culinary apps in the German-speaking world.

*Smart Food ID, CookAssist and Picture Share are additional digital services from Miele & Cie. KG. All smart applications are enabled by the Miele@home system. The range of functions may vary depending on the model and the country.