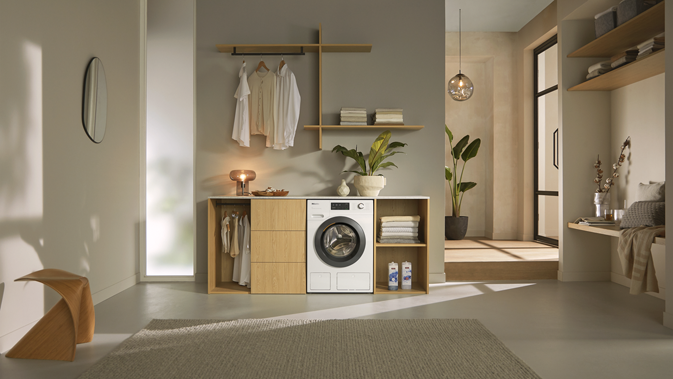 For the fifth time in succession, Miele washing machines sit at the very top of the winner's rostrum with Germany's consumer watchdog Stiftung Warentest (StiWa). In the current edition of their 'test' magazine (10/2022), the WCI 870 WPS and the WWE 360 WPS GreenPerformance achieved the top mark of GOOD (1.6) and putting in a compelling performance over a period of 10 years with their low running costs. In total, StiWa evaluated 14 frontloaders with load capacities between 8 and 9 kg.

As with the last washing machine and tumble dryer tests conducted by Stiftung Warentest, one Miele machine, in this case the WCI 870 WPS, stood out, sporting the best environmental properties – the only product to achieve the best mark of 'Good' (1.9). Among the other test winners, both Miele washing machines boasted the lowest running costs. Calculations were based on current average prices for electricity and water and also factoring in future annual price hikes. As a result, the editorial team issued its 'Environmental tip', most deserved, in particular, by the WCI 870 WPS for its lowest electricity and water consumption. Significantly, only the two Miele washing machines with an A rating for energy efficiency counted among the models rated 'Good' (1.6), whereas other entries failed to get beyond a C on the label.

'We are pleased about the most recent test win and, in particular, at the top marks awarded for environmental properties. This proves that our efforts in developing sustainable and low-consumption products have paid off', says Michael Endt, Category Marketing Germany.

The fact that both Miele models were awarded the top mark of 1.0 in the endurance testing category is not least the result of intensive strain tests carried out by the Gütersloh-based domestic appliance company, which are far above average for its branch of industry: Miele tests its washing machines to last up to 20 years (based on 5 cycles per week) and goes far beyond the StiWa requirements. Their benchmark is namely 9 years, presuming 3.5 cycles per week. Praise was also forthcoming in the test for the precision of the countdown indicator and the ease of cleaning and maintenance. In the other categories, too, Miele washing machines have always achieved a 'Very good' or a 'Good'.

Alongside the criteria included in the evaluation, both models in the test convinced with their innovative PowerWash process with which even very small loads can be washed clean (A-rated wash efficiency) without compromising on energy efficiency. In combination with QuickPowerWash, this is even done in less than one hour. CapDosing allows special-purpose detergents, fabric conditioner and additives to be dispensed from practical capsules. The AddLoad function allows forgotten items of laundry to be added or even taken out right through until almost the end of the programme. Naturally, both machines also sport the legendary Miele honeycomb drum for the ultimate in gentle laundry care.

The WCI 870 WPS also features the integrated and automatic TwinDos liquid dispensing system. With TwinDos, up to 30%* of detergent can be saved, as has been independently confirmed by the reputable Freiburg-based Öko-Institut. TwinDos dispenses automatically at precisely the right point in time in the correct ratio: Over- and underdosing and the need to physically handle detergent is a thing of the past – for maximum convenience and laundry care at the touch of a button.