For the big wash by bakers and butchers: Little Giants from Miele offer even more space 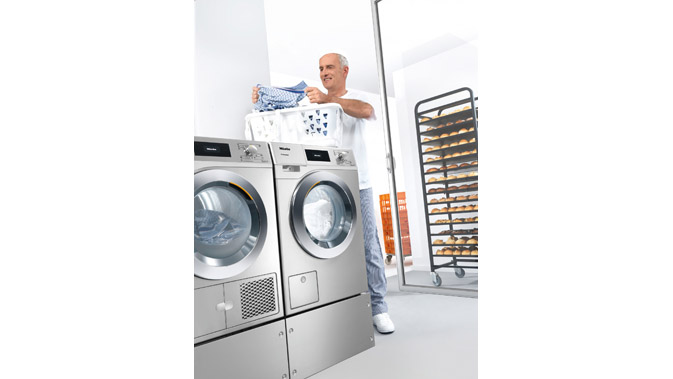 Stubborn stains are the order of the day in bakeries and butcher's shops – where flour, fat and spices abound. For more than 40 years, Little Giants from Miele have proven their worth. These compact washing machines and tumble dryers are due to be replaced in April by two completely redesigned model series. As previously, the new machines take up only half a square metre of floor space, yet offer considerably bigger load capacities. At the same time, water and electricity consumption is set to drop.

Even at first glance, the high-quality stainless-steel fascia immediately betrays the fact that these are commercial machines. The technology behind the scenes, above all, is designed to cope with significantly higher levels of strain and use. What's more, the machines are now available in three sizes: Washing machines and tumble dryers from the 'Performance' series offer a load capacity of up to 7 kg. Clients opting for the 'Performance Plus' series can decide between load capacities of 6, 7 or 8 kg. Naturally, all models feature the enhanced Miele honeycomb drum and can be space-savingly installed as a washer-dryer stack.

The new Little Giants boast an increase in load capacities of up to 25% - without any negative impact on cycle times. Consequently, the shortest cycle takes only 49 minutes. Despite a larger load, water consumption has been reduced by up to 22%; electricity savings peak at 28%. Work has continued on reducing drying times: The fastest programme on vented models is now down to only 37 minutes. The heat-pump dryer requires less than 60 minutes, or just two-thirds of the previous cycle duration.

This is the result of interaction between several components. Textiles are, for instance, more intensively wetted than previously thanks to additional perforations in the drum rear panel. This effect is further intensified by a special wash rhythm in which a slow rotational speed allows copious amounts of water to shower down onto the load. Once the drum revs up, water and soil is powerfully rinsed out. This guarantees top-notch cleanliness combined with the gentlest care of fabrics.

Programmes to tackle grease and flour

To ensure that towels and aprons are not marred by stains, the new 'Workwear' package offers three programmes which were specifically developed to tackle flour, fat and oil stains. This includes a pre-wash at 40°C which guarantees the reliable removal of grease – without allowing temperature-sensitive soils to burn on.

These programmes can be selected in up to 32 languages via a new, easy-to-use text display, including a delay-start facility. Workaday life is further simplified by a door which is particularly easy to open, without having to press a separate button to release the door lock. The dryer excels in terms of the simplicity with which filters are cleaned. Another practical feature: A sensor-controlled level-fill indicator for detergent. Furthermore, machines from the Performance Plus series offer Wi-Fi connectivity, allowing them to interact with the separately available MielePro@mobile app. This app then allows the status of machines to be checked.

Subsequent drying is curtailed through the particularly effective dewatering of textiles during spinning, now even reaching a g-factor of 704. That is one-third higher than on the previous generation – and sets a new benchmark in the marketplace. Despite a clear increase in spin speed, the machine runs just as smoothly, an aspect which, in combination with high-quality components such as grease-resistant silicone components, makes for product longevity: The new Little Giants successfully passed endurance tests equating to 30,000 hours of operation. They all meet legal workplace safety requirements and are fully compliant with the European Machinery Directive which regulates the use of machines put to commercial use.