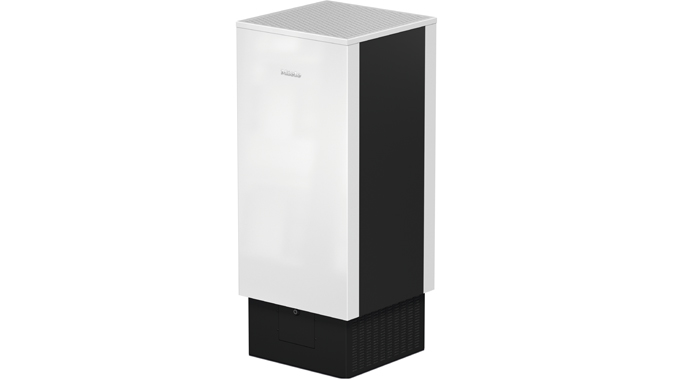 How do air purifiers with a HEPA filter perform in practice? This is currently a hotly discussed topic, above all regarding use in schools. Answers are provided by a recent series of experiments carried out by the highly reputable HYBETA medical hygiene institute in Münster, Germany, in collaboration with Miele. The test involved putting a mobile PAC 1080 Miele AirControl air purifier through its paces.

It is now scientifically proven that the SARS-CoV-2 virus is largely distributed through aerosols. In order to simulate concentrations in closed spaces, the test array used by the institute in its series of experiments involved the use of six heated dummies emitting a steady stream of aerosols. Readings were taken continuously at four locations in a room with two windows with a floor area of just less than 50 m². A comparison was made of the concentrations over time both with the windows closed and with ventilation occurring at regular intervals – in both cases with and without the Miele AirControl air purifier scrubbing the room air at the rate of six times per hour.

In the absence of AirControl, the concentration of aerosols even increased when the windows were opened for 5 minutes every 20 minutes. After airing the room, values dropped initially before increasing again at the same rate in each case. Only through the use of the air purifier was it possible to keep concentrations at a consistently low level over a period of 100 minutes.

The bottom line of the study was that the air purifier reduces the aerosol concentration in both scenarios. And: Air purifiers can also make an important contribution towards containing the spread of the pandemic, and can therefore, alongside hygiene, masks, social distancing and ventilation, be seen as another weapon in our armoury.

The study shows that concentrations can be kept at a low level in rooms where exposure to aerosols is high. According to the motto 'prevention is better than cure', this approach is likely to play an important role not only in schools. In the current debate on kick-starting the economy once again, mobile air purifiers can support the opening of businesses, hairdressers and all other places where people spend prolonged periods of time in closed rooms. As filtration is general and not limited to reducing SARS-Cov-2 levels, it can be seen as a long-term value-added approach.

Company profile: Miele is the world's leading manufacturer of premium domestic appliances including cooking, baking and steam-cooking appliances, refrigeration products, coffee makers, dishwashers and laundry and floor care products. Their product portfolio also includes dishwashers, washing machines and tumble dryers for commercial use as well as washer-disinfectors and sterilisers for use in medical and laboratory applications (Miele Professional). Founded in 1899, the company has eight production plants in Germany, one each in Austria, the Czech Republic, China, Romania and Poland as well as two production plants belonging to its Italian medical technology subsidiary Steelco. Sales in the 2020 business year amounted to around € 4.5 bn (thereof 29.5% in Germany). Miele is represented with its own sales subsidiaries and via importers in almost 100 countries/regions. Throughout the world, the family-run enterprise, now in its fourth generation, employs a workforce of around 20,900, of which approx. 11,050 employees work in Germany. The company has its headquarters in Gütersloh in Westphalia.