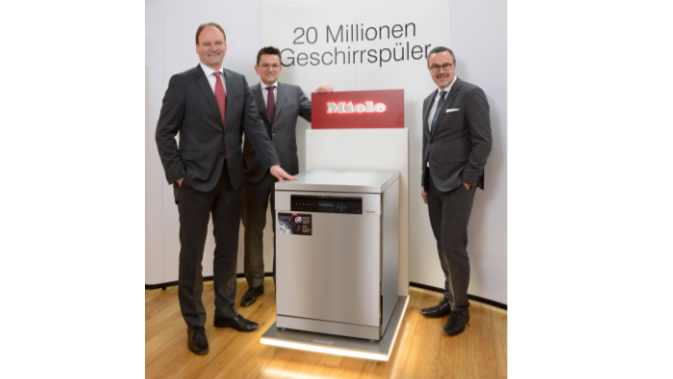 Bielefeld, May 17, 2019. – What began 90 years ago was to become a most extraordinarily arresting success story – marked by impressive technical milestones and millions of satisfied customers. The most recently produced 20-millionth dishwasher is a G 7310 SC Clst. This means that it belongs to the G 7000 generation, which was launched in autumn of last year. Thanks to AutoDos with integrated PowerDisk, this model to celebrate the anniversary dispenses automatically.

Whether intuitive colour M Touch display, unparallelled loading convenience, smartphone controls or the aforementioned automatic dispensing – these features render the Miele G 7000 peerless in the marketplace. It also affords its users untold freedom, relieving its owner of some of the stresses of everyday life. This starts with AutoDos and PowerDisk: This feature automatically dispenses a powder granulate exclusively developed for Miele, depending on the programme and the degree of soiling, whereby one PowerDisk is sufficient for around 20 cycles. What's more, all G 7000 models with AutoDos can be remotely controlled by an app from a smartphone, for example with a convenient calendar function with which to manage programmed starting times (AutoStart).

For even greater loading convenience and flexibility, the new height-adjustable 3D MultiFlex drawer offers not only more space for knives, forks and spoons but also for other small items such as espresso cups. The baskets score highly with their hinged spikes, additional holders and silicone rests – offering a secure hold to meet a wide range of loading needs. All this comes together on the G 7000 with an A+++ minus 10% energy efficiency rating and water consumption starting at only 6 l in the Automatic programme.

First saw the light of day 90 years ago

Naturally, the predecessor of the G 7000 dating back to 1929, launched by Miele as Europe's first electric dishwasher, was far removed from such an illustrious feature set. That early version consisted of a round metal tub with two baskets for crockery and cutlery. Piped hot water was inconceivable in those days, hence the dishwasher had to be filled manually. The water was sprayed over cups, plates and crockery for several minutes by an electrically powered propeller. Unfortunately, this visionary and highly plausible principle was unable to assert itself. 'The machine was quite expensive – and the few people who could have afforded it had maids to do the housework', explains Dr. Markus Miele, Executive Director and Co-Proprietor, as he turns back the pages of time.

The dishwasher only took off in earnest in private homes around 1960 when Miele in Bielefeld turned over production from bicycles and motorised bicycles to manufacturing fully automatic dishwashers. From the pre-wash cycle through to drying, everything in by now three dishwashing programmes was controlled fully automatically. In 1978, Miele introduced the world's first dishwasher with microcomputer controls and sensors, further simplifying machine use whilst at the same time slashing both water and electricity consumption. Nowadays, sensors are even able to detect the degree of soiling and the hardness of the water supply.

A further milestone followed in 1987: With its patented cutlery drawer, Miele created a third tier which, since 2010, has been height-adjustable and included sliding sections. With the introduction of AutoOpen, which automatically opens the dishwasher door at the end of a cycle to the ajar position in 2010, Miele also improved drying. This was followed in 2013 by fully integrated models with Knock2open: With this feature, a slight tap on the door opens the dishwasher automatically – without the need for a handle, which would otherwise spoil the aesthetics in a completely flush and handle less kitchen.

Throughout the years, one thing has always been at the focus of Miele attention: Lower water and electricity consumption without compromising user convenience and top-class dishwashing performance. Miele has achieved much in this respect – as convincingly evidenced not least by numerous top rankings with the leading German consumer watchdog Stiftung Warentest.