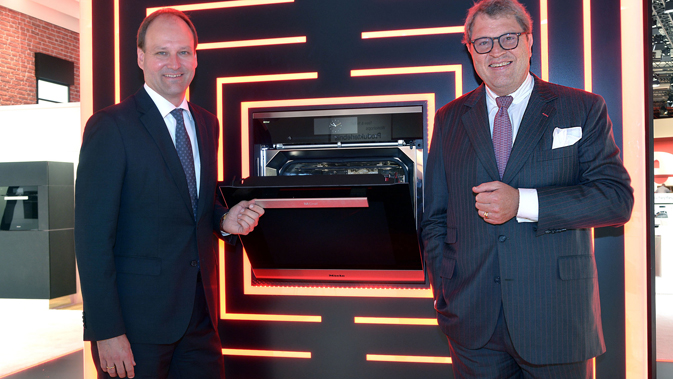 The Dialog oven is faster and more versatile than any other cooking product – and achieves best results / New robovac sends live images to mobile phone / Zinkann: 'The IFA is our most impressive trade show'

'Biggest innovation leap forward since induction cooking' – These were the words used by Miele in the ramp-up to the IFA trade show to describe its most important new product. The two Executive Directors and Co-Proprietors Dr. Markus Miele and Dr. Reinhard Zinkann presented more concrete details at the company's IFA press conference today. The second IFA highlight unveiled by the Gütersloh family-owned company was the new Scout RX2 robovac: with cleaning performance improved by a factor of three, remote controls via the Internet – and the transmission of live images to a smartphone or tablet PC.

The Dialog oven is a revolutionary new cooking appliance which can, for example, cook fish embedded in the centre of a block of ice - without the ice melting. Or: Such dissimilar fresh ingredients for an entire meal as a leg of lamb, green asparagus and potato wedges are placed on an oven tray – and finish cooking, done to perfection, at precisely the same time. 'The results are simply excellent, and the cooking process is up to 70% faster than using conventional technology', claimed Markus Miele at the press conference. So although it looks no different than a regular oven, the Dialog oven conjures up hitherto unknown experiences in the world of cooking and pleasure.

The heart and soul of this appliance is new technology called M Chef. Here, electromagnetic waves communicate in a smart way with the texture of food, hence the term 'Dialog' oven. As these waves cook without browning, the Dialog oven always combines M Chef technology with radiant and convection heat as in roof and floor heating or fan heat. 'This facilitates the fast, gentle and tasty preparation of food', Miele continues. The bottom line is that meat is more uniformly cooked and more succulent, fish and vegetables retain their fine structure and dough rises better during baking. The market launch of the Dialog oven is planned for April 2018 in Germany and Austria.

Marking Miele's tenth appearance at IFA (together with the white goods branch as a whole), Reinhard Zinkann thanked Messe Berlin 'for a very trusting, fruitful and successful relationship': 'Ever since our IFA premiere in 2008, we have, together with our partners in the trade and consumers alike, experienced the most impressive trade show events in the history of our company'.

Company profile: Miele is the world's leading manufacturer of premium domestic appliances including cooking, baking and steam-cooking appliances, refrigeration products, coffee makers, dishwashers and laundry and floor care products. This line-up is augmented by dishwashers, washer-extractors and tumble dryers for commercial use as well as washer-disinfectors and sterilisers for use in medical and laboratory applications (Miele Professional). The Miele company, founded in 1899, has eight production plants in Germany as well as one plant each in Austria, the Czech Republic, China and Romania. 2016/17 turnover amounted to approx. EUR 3.93 bn with sales outside Germany accounting for 70%. Miele is represented with its own sales subsidiaries and via importers in almost 100 countries. The Miele company, now in the fourth generation of family ownership, employs a workforce of around 19,500, 10,900 thereof in Germany. The company headquarters are located in Gütersloh/Westphalia, Germany.