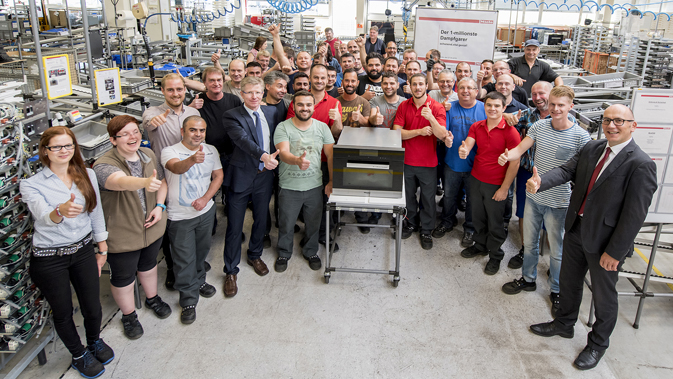 Miele's Bünde plant recently put the finishing touches to its one-millionth steam oven. This number illustrates a success story as only 20 years ago domestic steam ovens were rarities in the kitchen. It was Miele which ensured this product its breakthrough and is still the company which today offers the broadest range of steam ovens and combination products. These products are manufactured in Bünde (Germany) using the latest communication technology.

'Bünde is the birthplace of steam cooking as it is known today', says plant manager Dr Uwe Brunkhorst during a photoshoot with employees on the steam oven assembly lines. 'One million units is quite a milestone, but we intend to reach the 2 m mark far faster', says the plant manager. This optimism is not without cause as in 2016 alone Miele is set to build almost 90,000 steam cookers and combination units using steam. 20 years ago, there was no indication that sales would rise to such heights, with annual unit sales languishing in the four-digit range.

The first domestic steam oven was first introduced in 1983

The question as to who invented this product is clear and unequivocal: The first steam oven for household use was launched in 1983 by the Imperial brand, based in Bünde. This model was essentially a pressure cooker requiring considerable installation effort – one of the reasons why a breakthrough was a while in coming. This only changed when Miele took over its former supplier. Within a matter of only a few years, the first pressureless steam oven was developed in Bünde and launched as the DG 163 in 1998. The Miele product was equipped with a water tank and, as a plug-and-play unit, was incredibly simple to install in an existing kitchen.

Similarly, there was no need for any rethinking in terms of cooking habits, either, as cooking times on this pressureless cooker were roughly similar to conventional cooking on the hob.

Further impetus came from a scientific study, conducted by the Justus Liebig University in Giessen and by the University of Koblenz-Landau (both in Germany). These investigations confirmed that cooking in a Miele steam oven is far superior to traditional pan-based cooking: Fewer vitamins are lost and the taste and sensory properties of food such as its appearance are given much higher marks after a 'steam bath'. This was also reflected in extensive coverage of this new cooking method by the media.

From 2001 onwards, Miele set about establishing its Bünde plant as a competence centre for steam ovens, hob units and warmer drawers by concentrating the development and production of these products there. Over the years that followed, Miele 'steamed' ahead with a freestanding unit (2003), the first combination steam oven (2006) and, in 2009, with an entirely new production facility for steam ovens. The latest addition to the family of steam-cooking products are steam ovens with microwave – combination units which entertain no compromises in either discipline and hence help solve space problems in the kitchen.

Steam ovens are produced at the plant using the latest production methods. The buzzword 'Industry 4.0', otherwise referred to as the fourth industrial revolution, is more than familiar to employees: Each machine is assembled in its entirety by one single worker. In the process, support and assistance is provided by a tablet computer which illustrates assembly steps at each workstation. Benefits: Despite a growing number of model versions, the fault rate in assembly has dropped, and employees are able to familiarise themselves with their new tasks faster. Modern means of communication in the form of apps on tablets are also available to foremen for use in the deployment of line workers and also simplify trouble-shooting and remedying faults in the repair bay.

Miele Bünde employs a staff of around 600, including 35 apprentices. Approximately 400,000 kitchen appliances a year are produced in a production area covering around 40,000 m².

Company profile: Miele is the world's leading manufacturer of premium domestic appliances including cooking, baking and steam-cooking appliances, refrigeration products, coffee makers, dishwashers and laundry and floor care products. This line-up is augmented by dishwashers, washer-extractors and tumble dryers for commercial use as well as washer-disinfectors and sterilisers for use in medical and laboratory applications (Miele Professional). The Miele company, founded in 1899, has 8 production plants in Germany as well as one plant each in Austria, the Czech Republic, China and Romania. 2015/16 turnover amounted to approx. EUR 3.71 bn with sales outside Germany accounting for 70%. Throughout the world, the company, now in fourth-generation ownership, employs a workforce of 17,740, thereof 10,350 in Germany. The company headquarters are located in Gütersloh/Westphalia, Germany.