Just in time for its 60th anniversary: Miele plant in Bürmoos has successfully repositioned itself 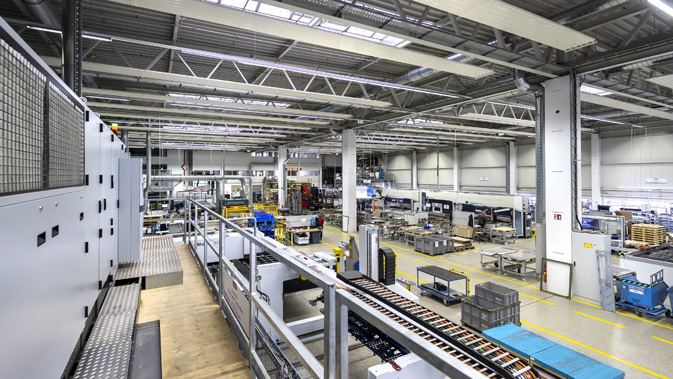 The Miele plant in Bürmoos near Salzburg has completely repositioned itself over the past four years - as a supplier of high-quality stainless steel components for almost all appliance plants in the Miele Group as well as for the Italian subsidiary Steelco Group. In addition, the new Miele subsidiary Otto Wilde Grillers has recently had its most established product range produced in Bürmoos. “Hardly a stone has been left unturned in our production halls,” says plant manager Dr. Hendrik Wermers. The necessary investments were made, for example, in a new cutting centre with laser processing and a fully automated high-bay warehouse, as well as in state-of-the-art production technology for surface processing.

When Miele set up its plant in Bürmoos in 1962, it was the first production site outside Germany. This step was originally intended to give Miele access to the EFTA free trade zone, which at the time existed parallel to the EU's predecessor organisation, the EEC, and to which Austria also belonged. Initially, small-room washing machines, spin dryers, and waste compactors were produced, before the factory specialised more and more in the processing of stainless steel sheets and wires. From 2012 onwards, the production of sterilisers and so-called container washing systems was added, in which, for example, instrument trolleys or entire hospital beds are disinfected.

The next turning point followed in 2017, when Miele acquired a majority stake in the Italian medical technology specialist Steelco Group and bundled its entire hospital project business there. This was done to strengthen competitiveness in what was then, as now, a fiercely competitive market worldwide - and it also affected the manufacturing of the appliances produced in Bürmoos. Now the challenge was to compensate for this and at the same time further improve the cost structures. “A time frame of four years was defined for this, which our team used with great commitment and, above all, successfully,” says Hendrik Wermers. In the process, production on the 40,000 square metre site was largely dismantled and rebuilt, and the processes were completely restructured. What has remained is the focus on high-quality stainless steel components, which are now distributed among these three product segments:

In the past four years alone, Miele has invested eight million euros in Bürmoos, for example in a high-bay warehouse for the fully automated supply of production with sheet metal blanks as well as for the storage of finished parts which were previously cut or punched by laser. Another major investment concerns the production of front panels for Miele appliances, which the Bürmoos plant now produces more than twice as fast as before. This is ensured by a highly efficient automatic front panel machine, which brings together the stainless steel and plastic components and finally also applies the model- and country-specific printing.

A completely new manufacturing process for Miele in Bürmoos is surface treatment by means of so-called electropolishing. This refers to a multi-stage electrochemical process for the best possible smoothing of the surface to prevent the adhesion of viruses and bacteria. This is particularly important for baskets and inserts and other components for use in medical and laboratory technology.

“Unfortunately, about 80 jobs had to be eliminated in the course of the realignment,” reports plant manager Wermers, “but all colleagues who were affected at the time have for the most part found new jobs seamlessly, not least thanks to our good contacts with other companies.” In the meantime, Miele is expanding again in Bürmoos and currently employs around 220 people. “They have all done a great job over the past few years, for which I would like to sincerely thank each and every one of them,” says Hendrik Wermers, “and I would also like to thank the experts at the Miele Professional plants in Bielefeld and Lehrte, which are connected to us, for their support.”

The latest addition to Miele's product portfolio in Bürmoos is the O.F.B. range from Miele's new subsidiary Otto Wilde Grillers in Düsseldorf. This is a top-heat grill which, depending on the model, is heated with gas or electricity, operates at very high temperatures, and is largely made of high-quality stainless steel. This is why Hendrik Wermers had initially wanted to bring his factory into the game as a supplier of components, but then also won the final assembly for Bürmoos. “We have the expertise, the capacities and the flexibility for that.” A deal was quickly reached with the new customer: “We are counting on a long-term partnership, because the Bürmoos plant helps us to take the next steps in quality, scalability and further product optimisation, even for our most established product,” says Otto Wilde production manager Dr. Achim Schade. Furthermore, despite enormous cost pressures, the company is pleased to have found a partner in Bürmoos in the heart of Europe.